When Taking Action for Wildlife came to Andover in the fall of 2012, the six-member conservation commission knew what they wanted to do - find creative ways to engage local residents and raise awareness about the value of wildlife habitats in Andover. They rolled up their sleeves and got to work right away. The group spent the winter months planning a program of public outreach activities to run from spring through fall, 2013. They included a mix of outdoor field trips, indoor slide presentations and a photo exhibit.  The outreach series was very successful, drawing well over 130 people to one or more of these events - each event was attended by 20-70 people and this was all accomplished with a minimal budget! Here’s how they went about it.

Each conservation commission member took the the lead for organizing one or more of the programs (see descriptions below). To market and publicize the outreach programs, Andover used every avenue available to them, at no cost. Press releases were sent to the local papers and radio stations, articles were published in the Andover Beacon and on the town website, fliers and posters were distributed around town, and e-mails were obtained from all participants so that people could be contacted via e-mail for each new event.  You can view two of Andover’s press releases here and on the Taking Action for Wildlife Stories page. Sending press releases to radio stations paid off in a big way – Abby Kessler of NH Public Radio attended the August Bog Pond field walk and recorded an “audio postcard” about the event (listen to it here). It was broadcast during prime time, giving statewide publicity about Andover and Taking Action for Wildlife.  In addition, most of the events were videotaped by a conservation commission member and edited for viewing on Andover’s cable Channel 8. Several of the events involved other organizations as collaborators.  Here is a listing of Andover’s 2013 Wildlife Outreach Series.

MARCH:  Andover wildlife habitat maps and a sighting-of-wildlife game were set up for display on Town Meeting day.  A selection of the Wildlife Habitat Stewardship brochures were available as handouts.

MAY:  “A Garden for Wildlife: Natural Landscaping for a Better Backyard” slideshow (one of the Speaking for Wildlife presentations given by Extension volunteers) was presented to the Andover Service Club. In a second program held in May, teams of Andover Elementary School second graders planted shrubs favored by wildlife on school grounds – this effort was led by students from Proctor Academy,

JUNE THROUGH SEPTEMBER: A photo exhibit of wildlife pictures submitted by townspeople was set up in the Andover Village Library, followed by a wildlife identification contest in the Andover Beacon.  The exhibit was later moved to the Salisbury Public Library and then displayed at Andover’s 2014 town meeting.

JULY:   Two programs were held in July.  Together with the Ausbon-Sargent Land Preservation Trust, a dragonfly walk and talk – complete with butterfly nets– was led by Andy Deegan (Ausbon Sargent) and Carrie Deegan (Society for the Protection of NH Forests).  In the second July event, Dave Anderson (Society for the Protection of NH Forests) led a forestry and wildlife walk at Bluewater Farm in Andover.

AUGUST:   A wetlands talk was held at the Blackwater Junction restaurant in Andover, followed by a field walk at Bog Pond with Emma Carcagno (UNH Cooperative Extension) – you can hear Emma in NHPR’s Audio Postcard.   In a second August event, stories about photographing moose and other wildlife were shared by Rick “Moose Man” Libbey at the Proctor Chapel in Andover.

The only expense associated with Andover’s outreach series was payment for one of the speakers ($300).  Other than that, the program was planned and conducted with no financial outlay. Buoyed by their success, Andover is continuing to offer public outreach events about wildlife in 2014, including a February snowshoe walk to identify animal tracks, two programs in May - a talk about the Quabbin to Cardigan project, and a plant and shrub sale of native NH species that support wildlife, and more events planned for the summer.

For more information about the Andover program, contact Mary Anne Broshek at mabandsadie@gmail.com, or Larry Chase at lbchase@aol.com.

We hope that community stories about their activities to take action for wildlife will help inspire other communities to conduct local activities to protect wildlife habitats. 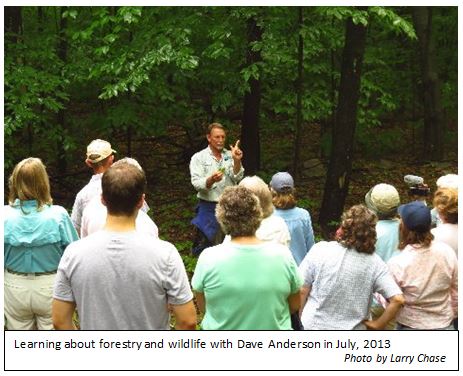